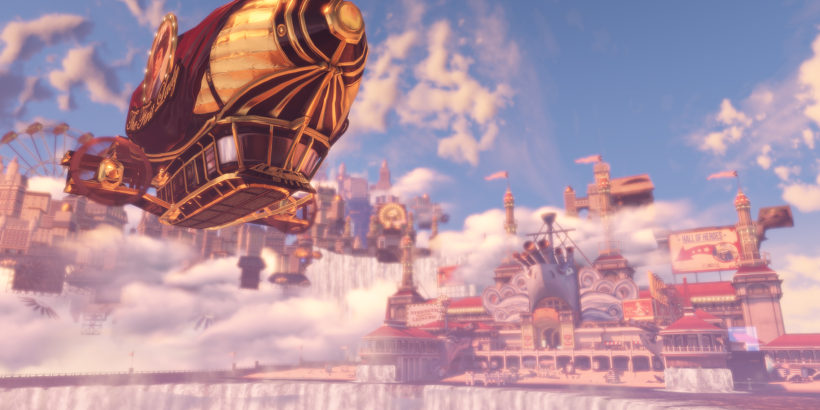 The original BioShock won the coveted Electronic Game of the Year Award (December 2007 GAMES), and now the first sequel produced by the original team is scooping up this year’s GOTY.

Bioshock is one of the best games in the history of the medium. Complex, entertaining, and occasionally profound, it showed what games can do in the hands of creative people with big ideas. It’s taken six years—and a rumored $100 million budget—to make a worthy follow-up to the original. Bioshock Infinite arrives to massive expectations for something that takes us beyond Rapture, Daddies, and Little Sisters. 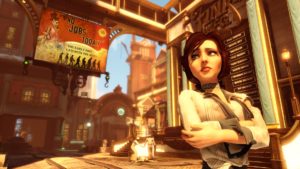 Anyone expecting a retread of the damp, claustrophobic atmosphere and objectivist critique of the first game is in for a shock from the opening moments. The world of BS Infinite is gloriously bright and colorful. It’s grounded in familiar elements—early 20th century, World’s Fair-inspired Americana—with the addition of equal parts steampunk and dystopia. Men in straw boaters, ladies in long dresses, carnival midways, and barbershop quartets—there is color and life everywhere, all seen through a nostalgic haze. In the midst of this, there are rumblings that something is different, from the mechanized men to the disturbing undercurrent of fanaticism and racism, and the very singular fact that the city is floating.

Buildings dock and separate, dirigibles dot the air, and skyway rails link locations. The city of Columbia lifted off from America, announced its independence, and disappeared into the clouds. Some things connect our world to this one. At one point, an air barge drifts by with a quartet singing “God Only Knows” by the Beach Boys. It’s a wonderfully whimsical moment, but like everything in Columbia, it’s tinged with darkness: You soon learn that their idea of God isn’t quite ours, and that this idea drives much of the madness that ensues.

The game, which uses the Unreal engine, is not just gorgeous. That’s to be expected in 2013. The wonderful thing is the staggering amount of visual style and invention on display. This is a dazzling act of world-building. 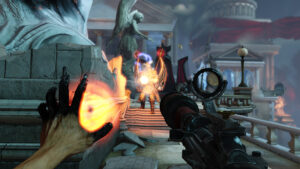 The gameplay is in the same mode as the original: narrative first-person action with conventional weapons, personal modifications, and special powers. Whereas the original Bioshock had plasmids, Infinite has “vigors,” which provide special attacks such as a rain of fireballs or a murder of crows that shoot from your hands. Enemies range from simple thugs to mechanized men to a giant mechanical guardian crow. As with other games in the series, you move through the world completing objectives, occasionally following subquests, collecting recordings that fill in the narrative, and killing enemies.

As the game goes on, the narrative becomes dizzyingly complex, drawing in parallel universes and bizarre time-space paradoxes. If people were worried that the team at Irrational couldn’t top the depth and imagination of the original game, they needn’t have worried: BS Infinite is brimming with ideas, people, and gameplay. It doesn’t always hold together, and it’s not as fresh as the original, but it’s a virtuoso performance that entertains as it challenges.—Thomas L. McDonald