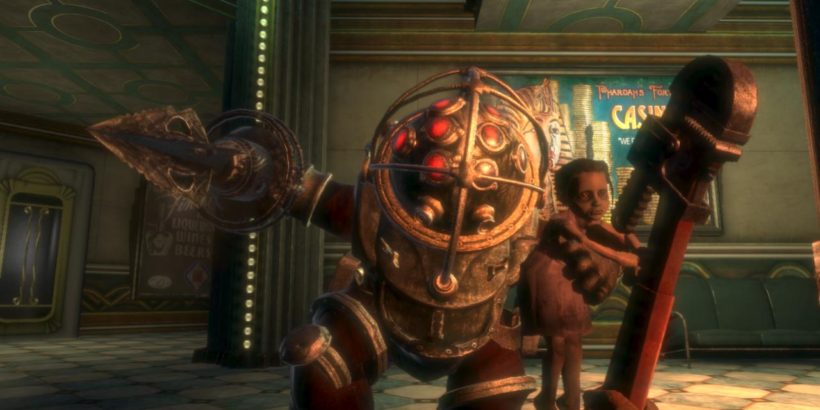 Sometimes a spoiler comes along just as we’re compiling the Electronic Games 100, dethrones our intended Electronic Game of the Year, and sucks up all of our time so that we miss deadlines. Bioshock is that spoiler. Until this heir to System Shock showed up, Lord of the Rings Online was leading the pack. It only took a few hours with Bioshock to know that couldn’t last.

System Shock is one of the landmarks in PC gaming history: a deep, first-person game that offers a vivid world and narrative, then lets you progress through combat, stealth, puzzles, or any combination of the three. Irrational Games, staffed by some of the original System Shock team, has called Bioshock a “spiritual heir” to that classic, and it’s easy to see why. Several of System Shock’s core elements have been carried forth into a new and even better game. 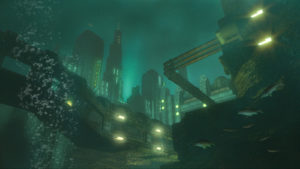 Bioshock is set in 1960, and begins with a plane crashing into the middle of the ocean. As the sole survivor, you swim through the wreckage, only to encounter a strange kind of lighthouse rising out of the deep. Inside, a bathysphere takes you into a city of wonder on the bottom of the Atlantic. Called Rapture, this city is the work of a megalomaniacal visionary named Andrew Ryan, a radical Objectivist millionaire who seeks to create an anarcho-capitalist utopia: Ayn Rand via Charles Foster Kane. As you’d expect from such a libertarian wonderland unfettered by morality or restraint, it doesn’t take long for Rapture to descend into utter chaos, leaving it overrun by genetic mutants as various factions fight for power. The story of Rapture’s collapse emerges piecemeal through messages and recordings collected in the course of exploration—a technique used to great effect in the original System Shock that works even better here.

From a pure gameplay perspective, Bioshock can be called a first-person shooter, but that would sell it short. The combat elements are handled elegantly, with many ways to approach each enemy. As you progress, you pick up Plasmids and Genetic Tonics, which can be loaded into a finite number of slots on your character. These genetic modifications add different kinds of attacks, but also enhance various physical, engineering, and combat skills. By using special stations, you can customize your character with very specific attacks and skills, enabling each player to create a unique character. The game also incorporates System Shock’s “hacking” mode, which allows users to solve puzzles (styled on the Water Works tile game) to bypass certain obstacles or gain bonuses. 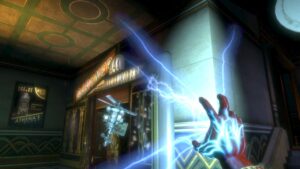 There is much more in Bioshock than this. The world itself is a richly detailed art deco hell populated with a large cast of characters and creepy enemies. And I won’t even go into Big Brothers and Little Sisters, who are not only strange and wonderful, but key to the entire game. Indeed, the game forces you to make a very moral choice in dealing with the Little Sisters. It’s the kind of choice a radical Objectivist like Ryan would believe is irrelevant to society, but it has a central effect on how the game plays out, leaving us with a very clear message about right and wrong and the place of the individual in society. And just how often does that happen in a video game?—Thomas L. McDonald