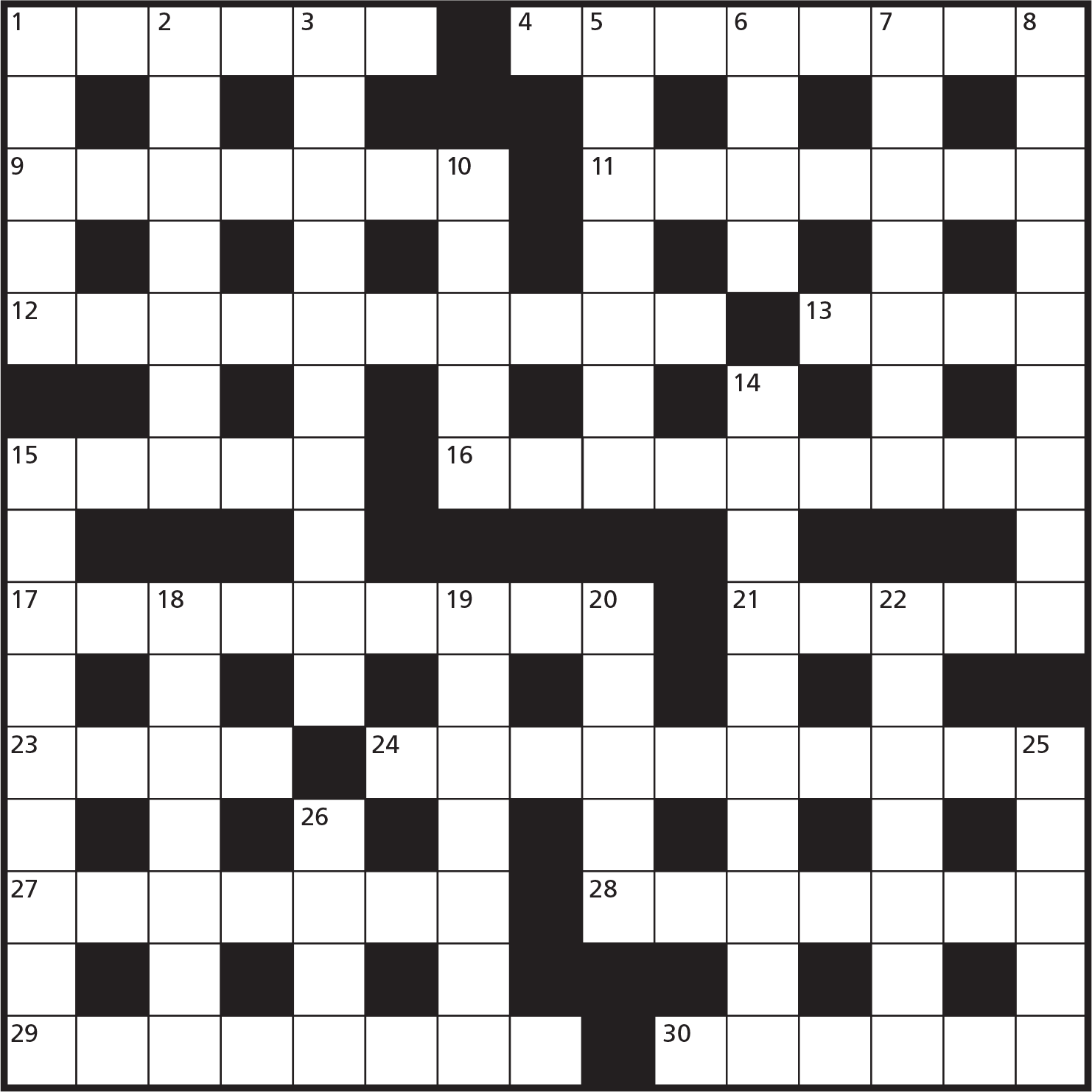 Every cryptic clue has two parts: a definition of the answer and an indication of the answer’s literal makeup through wordplay. Either half may come first, but there will always be a point at which the clue can be divided into these two parts. With two routes to the answer, you might expect cryptic clues to be easier to solve than standard crossword clues. But the devious creators cleverly join the two halves of the clue in ways that make it hard to tell them apart. Also, both parts may contain words that appear on the surface to mean something different from what they actually indicate. For example, the word putter in a clue may appear to refer to a golf club but actually mean dawdle or even one who puts.

Cryptic clues are followed by a number or numbers in parentheses indicating the length of the answer: (5) means it’s a five-letter word, while (2,3,4) indicates a three-word phrase like “in the know.”

Here are the eight common methods by which hints are given via wordplay, and hints for spotting them:

In an anagram clue, the wordplay half actually gives all the letters of the answer, albeit in mixed order. The rearranged letters are always immediately preceded or followed by a word or phrase that suggests the mixing, such as wild, drunk, repair, or in a muddle. For example:

The answer TARANTINO (“Pulp Fiction director”) comes from the snarled letters of “Tarnation.” Here’s another:

Model in a studio tries out for part (9)

“Model” looks like a noun here, but it’s actually an imperative verb, telling you to model the letters of the phrase “in a studio” to get AUDITIONS (“tries out for part”).

Hints for spotting this type: Look for a word or phrase suggesting mixing, and a word or group of consecutive words with the same number of letters as the answer.

In the parlor game of charades, words are acted out in pieces; similarly, some cryptic answers can be broken into smaller words that are clued individually:

The answer TARGETS (“goals”) can be broken into TAR (“sailor”) and GETS (“attains”). Charades may also have more than two parts:

Interrupting Ms. Derek with the chime (9)

The answer BOTHERING (“interrupting”) is made of BO (“Ms. Derek”), THE, and RING (“chime”). Pieces of a charade are usually clued by synonyms, but can be given explicitly (as THE in the example above). The pieces may also be clued out of order, with some instruction on how to put them together:

The clue tells you that ALLY (“friend”) follows TOT (“child”) to make the answer TOTALLY (“completely”). Sometimes the answer can be divided into pieces and clued as a phrase. For example, TANGENT can be broken into TAN GENT:

The question mark suggests there’s something punny going on in the clue.

Hints for spotting this type: Certain common word beginnings may appear, such as CON (“prisoner”), EX (“former” or “former spouse”), and IMP (“mischievous one”).

Some words can be looked at as one word inside another. For example, PATIENTS is the word TIE inside PANTS. A clue for PATIENTS might read:

The answer REARED is made up of RED (“russet”) which contains, or “bears,” the word ARE.

Sometimes the entire answer appears intact, albeit camouflaged, in the wordplay half of the clue:

The phrase “myoPIC COLOnel” holds, or “clutches,” PICCOLO (“flute”). Hidden word clues always have an indicator to signal that the answer is hidden in the phrase. Here’s another example:

The answer CANDICE BERGEN (“actress”) is “featured in” the phrase “titaniC AND ICEBERG ENcounter.” Sometimes the answer is hidden in alternating letters:

The answer DRYER is found in the odd letters of “DiRtY gEaR.” Sometimes all the initial letters or all the final letters spell out the answer, as in:

Heads of state hang out with guide (4)

The answer SHOW (“guide”) is hidden in the “heads of” State, Hang, Out, With.

Hints for spotting this type: Keep an eye out for indicators like incorporates, hides, is part of, and going through. Remember, though, that many of these can also signal container clues.

If the answer sounds exactly like another word or phrase, a homophone clue may be used. Here’s a possibility for CITES (a homophone of SIGHTS):

Quotes views for the audience (5)

Homophone clues always contain a word or phrase that suggests the phonetic quality of the wordplay half of the clue, such as for the audience, we hear, reportedly, vocal, and by the sound. The answer is CITES and not SIGHTS because the homophone indicator is always adjacent to the answer’s homophone; since the clue says “views for the audience,” we know we want a homophone of SIGHTS. The homophone doesn’t have to be a single word:

Hints for spotting this type: Look for any word or phrase that suggests part of the clue is heard or pronounced.

Some words spell other words when written backward, and reversal clues make use of this. For example, the word EDAM is MADE spelled backward. A cryptic clue for EDAM might read:

Every reversal clue contains a word or phrase suggesting the switched order, like the wrong way, returned, receding, in the mirror, to the left, or even simply left. Indicators in Down clues usually refer to an upward direction: overturned, rising, or to the north. For example:

The answer STOP (“close”) is POTS (“cooking vessels”) written upward (“up”). You can tell the answer is STOP and not POTS because the reversal indicator is adjacent to the words “cooking vessels,” telling you to reverse POTS. A reversal may use more than one word, much like a reversed version of a charade clue:

The answer TRADER (“merchant”) is RED (“rose”) and ART (“paintings”) reversed, or “put up.” Hints for spotting this type: Look for indicators like swiveled, backed, or around in Across clues, and flipped, upside-down, from the bottom up, or lifted in Down clues.

Many words become new words when they lose a letter, and deletion clues play on this. Deletions come in three basic varieties: beheadments, curtailments, and internal deletions. In each type, the clue contains a word or phrase indicating the deletion. In beheadments, a word loses its first letter. For example, PENCHANT becomes ENCHANT when the first letter is dropped. This leads to:

By “uncovering” or removing the first letter of PENCHANT (“bent”), you get the answer ENCHANT (“charm”). Other indicators include don’t start, topless, and after the first. Curtailments involve the removal of the last letter:

The answer SHREW (“Shakespeare’s Kate”) is SHREWD (“clever”) without its last letter (“endlessly”). Indicators include nearly and unfinished. An interior letter may also be deleted ( this is rarer):

The answer DARING (“challenging”) is DARLING (“sweetie”) missing its middle letter, or “heartlessly.” An internal deletion clue may even tell you exactly which letter to remove. For example, DOLT minus its third letter is DOT:

Hints for spotting this type: Words and phrases suggesting the removal or lack of something, in particular a top, front, bottom, or end, are likely deletion indicators. Many indicators are “-less” words such as “headless,” “endless,” “bottomless,” and the like.

A double definition clue is a little different from the other types in that it has no wordplay half; instead it has two definition halves. For example, a cryptic clue for PENNED might read…

…because the word PENNED means both “wrote” and “in confinement.” The two meanings may even have different pronunciations. MOPED could be clued:

Some words, while not actually having two meanings, might mean something else if clued in a punny way. For example, DESPOT looked at as DE-SPOT might lead to the clue:

The question marks serve to warn you that there’s something punny going on.

It’s quite common for two or more of the eight basic cryptic methods to be combined in a clue:

The answer TRACKING (“following”) is clued as a charade with one part reversed: CART (“wagon”) reversed (“returned”) and KING (“monarch”). THE “& LIT.”

We said that every cryptic clue has two parts: the definition and wordplay halves. In one special type of clue, the two parts overlap completely, so the whole clue is a cryptic indication of the answer, and at the same time the whole clue is a definition of the answer. A clue of this type is called an “& lit.” clue (since the answer explanation traditionally ends with “& lit.,” short for “and literally so“). Here’s an example:

The answer ENRAGED is both an anagram (or “terrible” arrangement) of “angered” and a word meaning “terribly angered.” The exclamation point at the end of the clue is the traditional signal for an “& lit.” clue. Here’s another example:

The answer IMAGE is I plus E.G. (“for one”) plus AM reversed (“reflected”). Due to their nature, & lit. clues are relatively rare.

Some words don’t lend themselves to simple combinations of the basic methods, and often the constructor will need to indicate a single letter or small group of letters. As a result, you can expect to see some common abbreviations (doctor for DR, Hawaii for HI, and college for U), chemical symbols (iron for FE), Roman numerals (five for V), and parts of words (end of year for R, head of cabbage for C, heart of stone for O, half-dollar for DOL or LAR) appearing in clues.