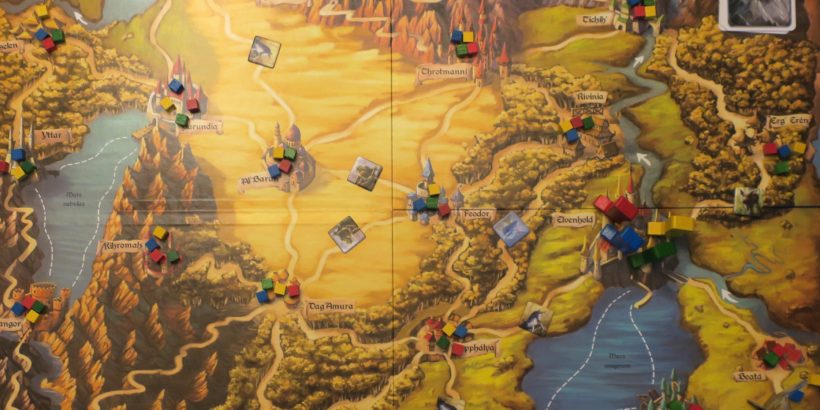 Before Alan Moon struck it huge with Ticket to Ride, he had a cult hit with a game variously titled Elfenroads and Elfenland, along with a hard-to-find expansion called Elfengold. Now Rio Grande has teamed up with Amigo to produce an entirely new big-box version that combines the base game Elfenland with Elfengold and a new version on the flip side of the board called Elfensea. But just what are these elves up to?

Using the most common forms of transportation—for example, dragon, unicorn, or magic cloud—young elves need to travel to as many towns as possible when they come of age. Transportation is limited, however, and not all forms work across all regions, which include desert, forest, plains, and water. Magic clouds can’t travel in the desert, for example.

The map consists of various towns linked by roads through these regions. In the first phase of the game, players alternate placing transportation tokens on individual paths between towns. Once tiles are placed, elves, represented by wooden elf boots in each player’s color, travel from town to town by paying a certain number of travel cards matching the transportation token. For example, if someone wants to pass though a desert with a unicorn token, the cost is two desert transportation cards. Each gamer also gets a blocking token that doubles the cost of traveling on that road. The goal is to plan a path that allows you to collect tiny wooden blocks in as many towns as possible over three rounds, with victory going to the player who collects the most.

The game weaves variants and complexities from this basic premise, such as adding town cards that provide bonus points and two alternate play modes. Elfengold lays a monetary system atop the basic gameplay, with people earning gold and bidding for tiles. Elfensea shifts the focus to marine travel with an entirely new map and new method of transportation (whales).

Fans have paid hundreds of dollars to buy the original limited-edition Elfenroads, so it’s great that Rio Grande has not only made it widely available, but has also included a rare supplement and an entirely new game in one big box with all new art and excellent production values. —Thomas L. McDonald