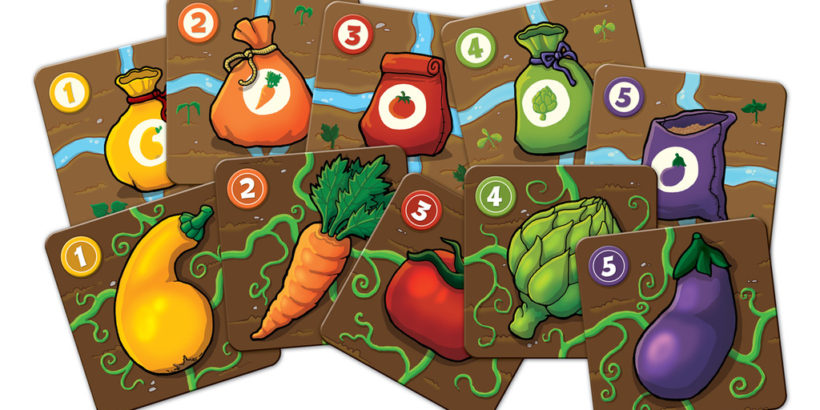 You begin this battle on a 6×6 garden with a Sundial, Bird, and Sun, and roll four regular dice to spend each turn. Use one die to purchase a vegetable seed of equal or lower value, and add a marker to it. Use two dice as the coordinates of a vacant space to place a purchased seed, Bird, or Sundial. The very tempting Sundial lets you amend dice used for coordinates. One die also lets you water (flip to crop side) a seed in play at most equaling the roll, or similarly harvest (remove) a crop for its value in points. Watering and harvesting spread that effect to all adjacent tiles of lower value, regardless of ownership, with the active player earning 1 extra point for each enemy harvested. No wonder placing lower values adjacent to competitors’ higher values is an oft-used ploy! 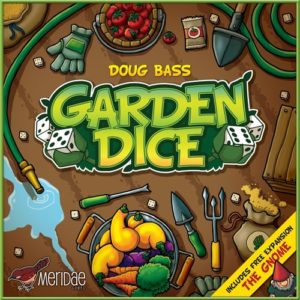 Move your Bird across vacant spaces up to the value of one die, to stop on reaching an enemy seed. You may then add another marker to the Bird to remove the seed from play, or “spit it out” with another roll at least equaling the seed’s value and retain it to place in future. Spend a 6 to flip the Bird to a Rabbit (or vice versa). Rabbits similarly devour crops reached. Any Bird or Rabbit may be ejected with three dice: a 6 plus both the coordinates of the targeted piece. These beasts will delight younger players, but can be greedy and frightening pests when used by astute adults. A 6 also flips your Sundial to a Scarecrow, which earns your adjacent crops extra points when harvested and protects them from pests. Abandoning the Sundial for this is not easy, but adroit use of this ploy marks an experienced and clever player.

When the last seed is purchased, earn points for sets (one of each crop) and collections (similar crops) harvested. Deduct points for unplanted seeds, but add points if you retained your Sun without using it to amend one die roll or reroll all dice. Bask in the sunshine of victory with most points.

A variant includes a Gnome that lets you amend dice when purchasing, watering, or harvesting. Adding to already enormous replayability is the card expansion. You always have three action cards and may play one per turn for its privilege (free watering or harvesting, extra points when harvesting or having configurations in play, etc.). When replenishing your hand reveals an Event, it replaces the current Event and affects all players. Events, for instance, permit rerolling one die, or demand extra pips for watering).

We are eminently qualified to assure you that it also plays well with two. My wife insisted that I bring it each time I visited her during a lengthy hospital stay.—John J. McCallion (originally reviewed in May 2013 GAMES)