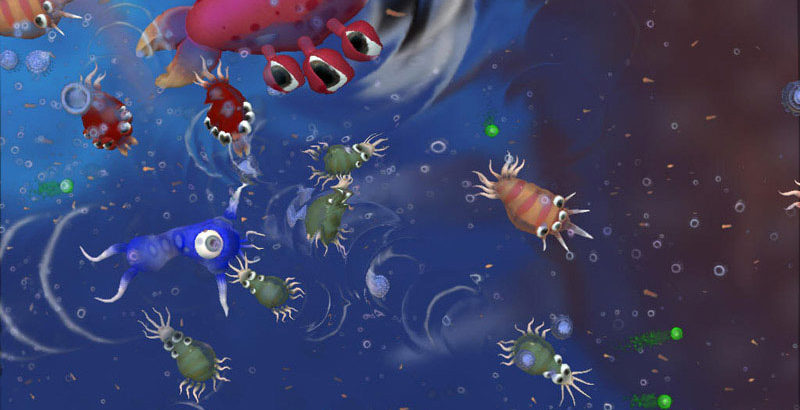 Spore is Will Wright’s magnum opus. The creator of SimCity has spent 20 years creating “software toys” that simulate life. SimCity, SimEarth, SimLife, SimAnt, and The Sims were all leading to this: a game that takes life from a single-celled organism, through all the stages of evolution, and finally to the creation of civilization and into space. 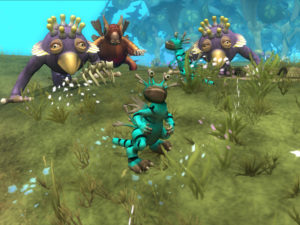 The sheer scope of the thing is dazzling. Its working title was SimEverything, which pretty well captures what the designers have attempted and, largely, achieved. The gameplay itself shifts effortlessly among genres, beginning with the feel of a casual game, then building element upon element: creature creation, real-time strategy, design, life simulation, civilization, and galactic exploration and conquest, all of it delivered as the ultimate God game.

Each phase of the game is more complex than the last, creating a constantly shifting and evolving gameplay experience. You begin in the Cell phase as a single-celled creature, carnivorous or herbivorous, swimming around in a primordial soup. This has the feel of a casual game, as the creature fights against currents in the tidal pool, attacking and eating weaker creatures while avoiding being eaten by stronger creatures.

As it consumes different organisms, it grows and accumulates DNA points, which can be spent to modify the creature. By selecting items from a growing palette of body parts, you equip your evolving critter with different kinds of mouth, legs, arms, feet, hands, eyes, and other features. Creature creation is a major part of the game, since many of the body parts affect other areas of gameplay. As the game progresses, these different parts will increase elements like attack and defense, sound, motion, speed, and more.

Eventually, you’ll have the option to move onto land and enter the Creature phase. Now you need to seek out a mate, reproduce, and maintain a nest. The area is surrounded by creatures both hostile and benign. You continue to gather DNA points, but now you can do so either by eating creatures or by befriending them. The combat is simple point-and-click, but you draw from an array of attack types determined by your creature design. Design also determines social interactions, as you can equip your creature to perform a variety of poses and sounds that appeal (or not) to other creatures.

As you’re expanding your territory, the creature is continuing to evolve, and its brain is growing. Once it reaches a certain level, you move on to the Tribal phase. Your control over specific elements of creature design fades, and you begin to focus on how these creatures behave. At this point, Spore begins to feel more like an RTS game, as you assign different tasks to your creatures, barter with other tribes, and domesticate creatures for food. Each time you befriend or destroy another tribe, you get a piece of a totem pole. 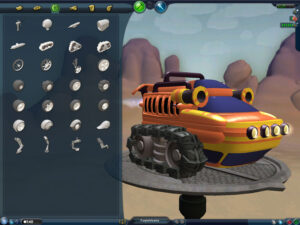 When you have enough pieces, you move on to the Civilization phase. The tribal camp becomes a city, you get a building and vehicle editor, and you start spreading your influence through both propaganda and force. At this point, Spore becomes a kind of mini-Civilization. Once this civilization reaches a certain size and technology level, the game zooms out to view the world from space. You get a spaceship editor, and can start expanding to other planets. By exploring, terraforming, and colonizing these planets, your creatures spread their influence throughout the universe. They’ll eventually encounter other beings—many of them created by other users—some hostile, some friendly.

The cumulative effect is simply dazzling. The game is one long, slow zoom out from an extreme closeup to a vast wide angle, encompassing the entire sweep of life from the tiniest organism to the far reaches of space. There is even a significant online component, since the creatures/tribes/civilizations of other users are uploaded to a central site, and may appear randomly in any user’s game. Thus, the life forms you encounter can be incredibly diverse, and not limited to those packaged with the game.

It is a simply spectacular achievement in game design, the culmination of Will Wright’s lifetime of experience building life simulations. Many games throughout the years have been called “God games.” Spore is, at last, the real thing.—Thomas L. McDonald