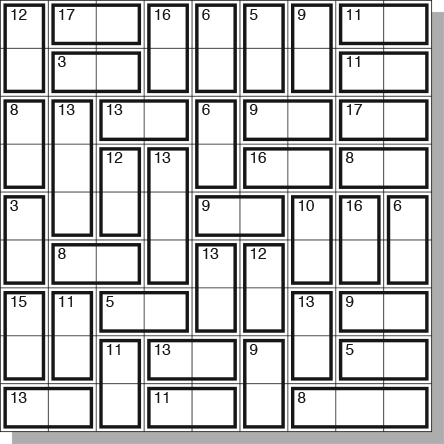 Weʼve had tons of requests for help in getting started on Sumoku puzzles. There really are a wide variety of strategies for these challenging puzzles, and we thought the best way to describe some of those strategies was to actually work through a puzzle from start to finish. As we solve, it might be handy for you to fill numbers into the current diagram in pencil.

The first thing to think about are the ways that numbers can be partitioned as the sum of two other numbers. For example, on one extreme, a sum of 3 can only be broken down one way (1+2), while at the other extreme, 10 can be partitioned four ways using the digits 1 to 9 (1+9, 2+8, 3+7, and 4+6). People who solve many Sumoku puzzles become very familiar with the various combinations. Hereʼs a list: 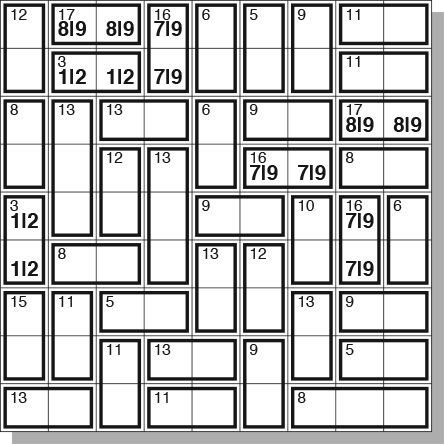 In this second diagram, Iʼve “penciled in” all pairs that can only go one way. Notice that we havenʼt quite determined the final numbers that go in the slots, but weʼve narrowed each down to just two numbers. Look at the 8|9 pair in the first row. Since no digit appears more than once in a row or column, no other slot in the first row can be an 8 or a 9. Thus, we know that the fourth slot of the first row is a 7 rather than a 9, and the fourth slot of the second row is a 9. If you look in the eighth column, you can likewise see that the third slot down in the eighth column is an 8 rather than a 9, and its partner at the end of the third row is a 9. Staying in the third row, letʼs consider how we can get a sum of 13. Itʼs not 4 and 9 or 5 and 8, since 8 and 9 are already taken, so it has to be 6 and 7. Since we already have a 7 in the fourth column, the third number of the fourth column is a 6, and its partner in the third column is a 7. We now have 6 through 9 determined for the third row. By elimination on possible partitions of 9, the sixth and seventh number in the third row are 4 and 5, in some order. The first slot in the third row isn’t 1 or 2, since 1 and 2 are already in its column. By elimination, that slot holds a 3. Its partner in the first column is a 5. Look at the 12-box in the first column. It canʼt hold 3 and 9 or 5 and 7, since 3 and 5 are taken, so it holds 4 and 8. The top number isn’t an 8 (see above), so itʼs a 4 and its partner is the 8. 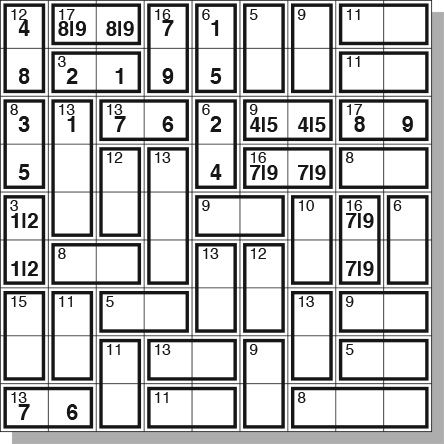 The third diagram shows our long overdo update. See if you understand how everything has been filled in. 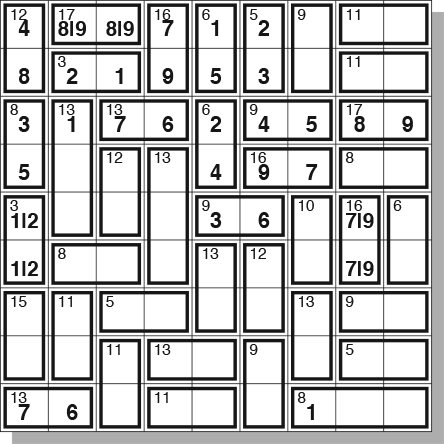 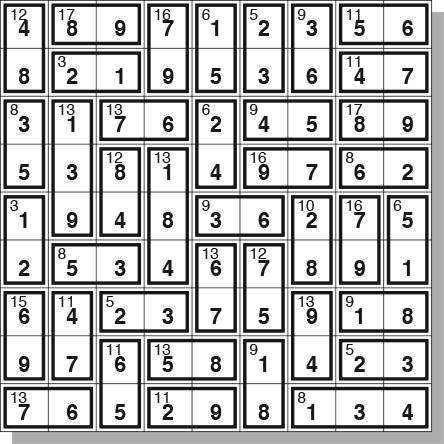 By utilizing the facts and techniques developed here, and exercising a lot of patience, you can become a skilled Sumoku solver in no time.