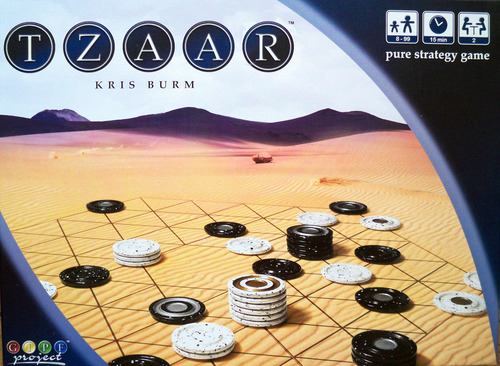 Belgian designer Kris Burm produces abstract strategy games that testify to his love for those timeless classics that began the history of board games. His Dvonn was our Game of the Year in December 2002, and he has once again triumphed with another masterpiece arising from simple rules.

Surrounding an impassable area in the lined board’s center are 60 intersections. White and Black each have three kinds of discs, all of which are equal in power and movement ability: six Tzaars, nine Tzaaras, and 15 Totts in each color. The game begins with all the discs placed randomly on different intersections, although beginners might prefer to use the suggested starting array. Experienced players may prefer the tournament version, in which contestants in turn add one of their pieces to the board until it is filled.

White begins by capturing an adjacent enemy by occupying its space and removing it. Further turns must start with a capture, followed by one of three possible actions: (a) capturing again, with the same or another unit; (b) placing a friendly disc or stack on top of another friendly disc or stack; or (c) passing. Stacking/capturing is executed on adjacent pieces, or by moving across contiguous vacant intersections to reach the first occupied intersection. A stack captures singletons or other stacks of equal height or less.

Win by depriving the opponent of a capture on the first part of his move, or by eliminating one of his kinds of discs. Only singletons or discs on top of stacks count. It’s supremely difficult to balance the creation of tall, strong stacks with capturing and weakening the opponent. Expect fascinating endgames that demand extremely accurate play as you strive to get the last capture while protecting your weaker discs. (originally reviewed 10/08)—John J. McCallion